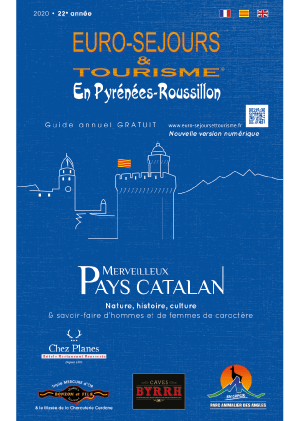 Our magnificent Catalan Coast stretches from Le Barcarès down to Le Racou, the start of the Vermillion Coast. The Mediterranean Sea, with its different shades of blue, shimmers in the sunshine. There are always moments of intense emotion provoked by the natural magic of the Rocky Coast, stretching from Collioure – jewel of the Vermillion Coast – to Cerbère. 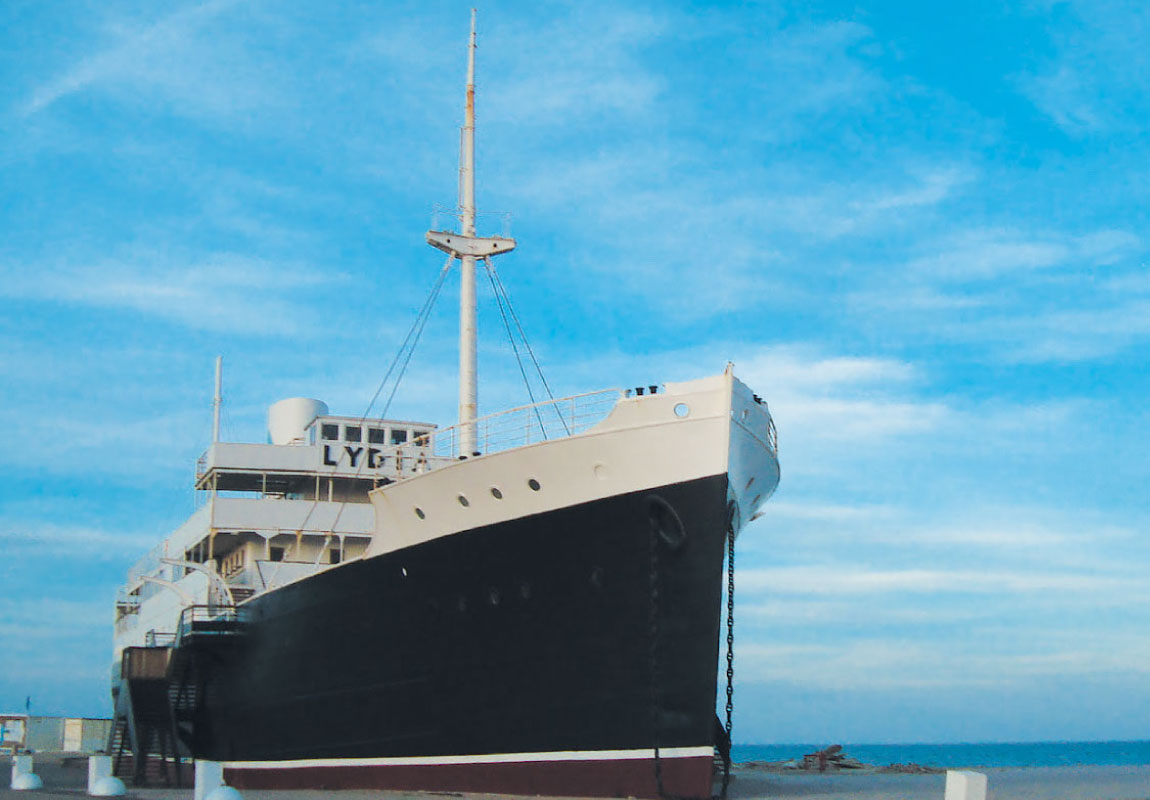 Renowned for its construction of Catalan rowing boats since the 19th century, Barcarès boasts some 1,400 berths split between the port, the marina and the lake. The ‘Lydia’ is the only liner in the world that is installed on a beach. It has become the centre of a wide range of activities throughout the year. The Christmas market is installed nearby every year for the Christmas season and hopes to become a national flagship for such events.

► VISIT the Alley of the Arts.
► DISCOVER the salt lake, its pine woods and its 8 kms of fine sandy beaches.

With more than 420 berths, the port is located at one end of this seaside resort which has ample facilities for family, sports and leisure activities.

►  LOOK AT the 10th century Pre-Romanesque lintel in the church of Our Lady of Assumption in the village 2 km inland. 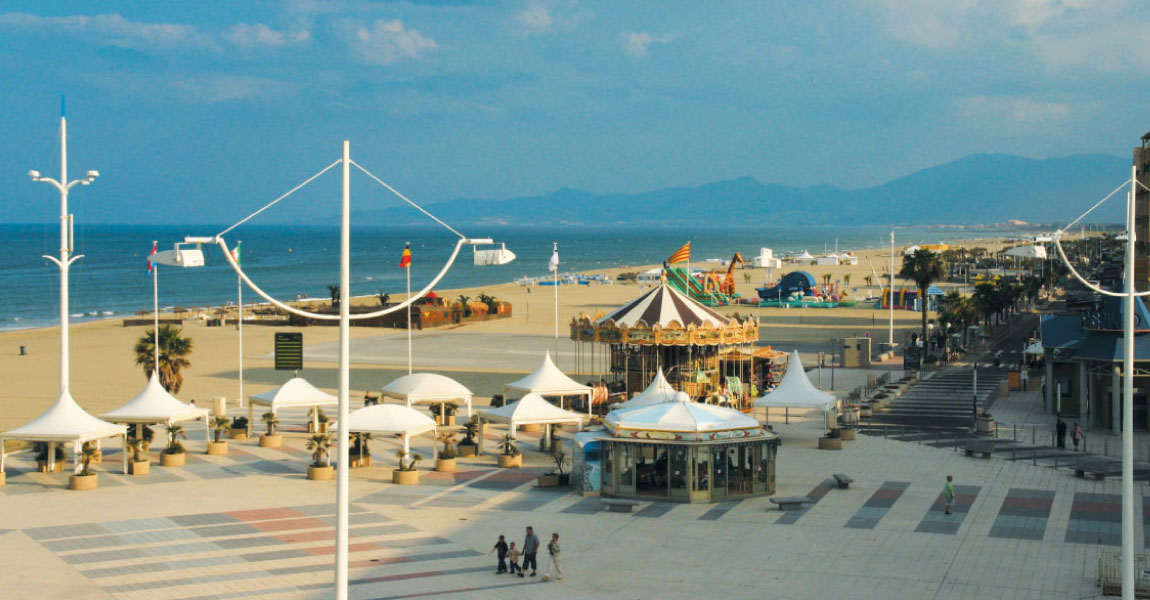 As an important town, Canet en Roussillon served as a natural port initially for Ruscino and later for Perpignan. At the beginning of the 19th century, the town offered the new pastime of ‘sea bathing’, becoming a fully-fledged seaside resort in 1909, by taking full advantage of its fortunate geographical situation. Further improvements since then have added to the attraction of the 9 km of fine sandy beaches. An evening market on the sea front and a range of other activities centred around the Place de la Méditerranée and the neighbouring quarter attract many tourists.

►  LOOK AT the 14th century Gothic church dedicated to Saint-Jacques, the 11th century castle ruins and the ice well built in 1688.

►  VISIT the Hospices Gallery and the 11 hectare (27 acre) Arboretum. 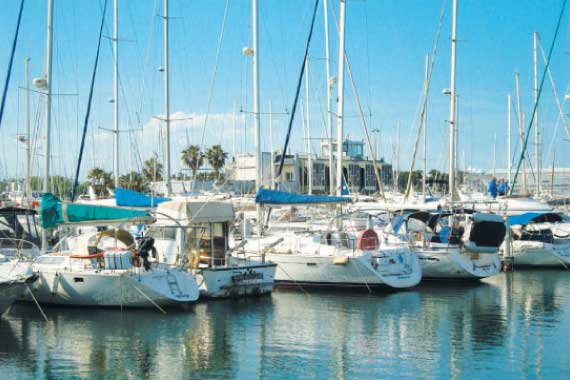 Awarded the status of a ‘5 star Quality Harbour’, the port and its 1,300 berths are near many amenities. Yachtsmen can enjoy quality activities at sea as well as enjoy a range of summer events in the resort. 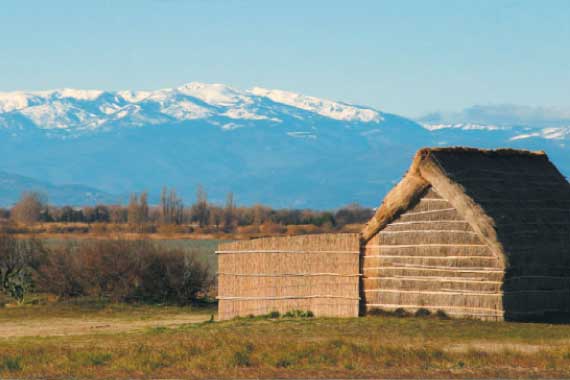 Granted the “Natura 2000“ award, this site maintains a natural habitat for fauna, while keen ornithologists delight in the wide variety of bird species.

► VISIT the permanent exhibition in the fishermen’s village, rebuilt in 1993. 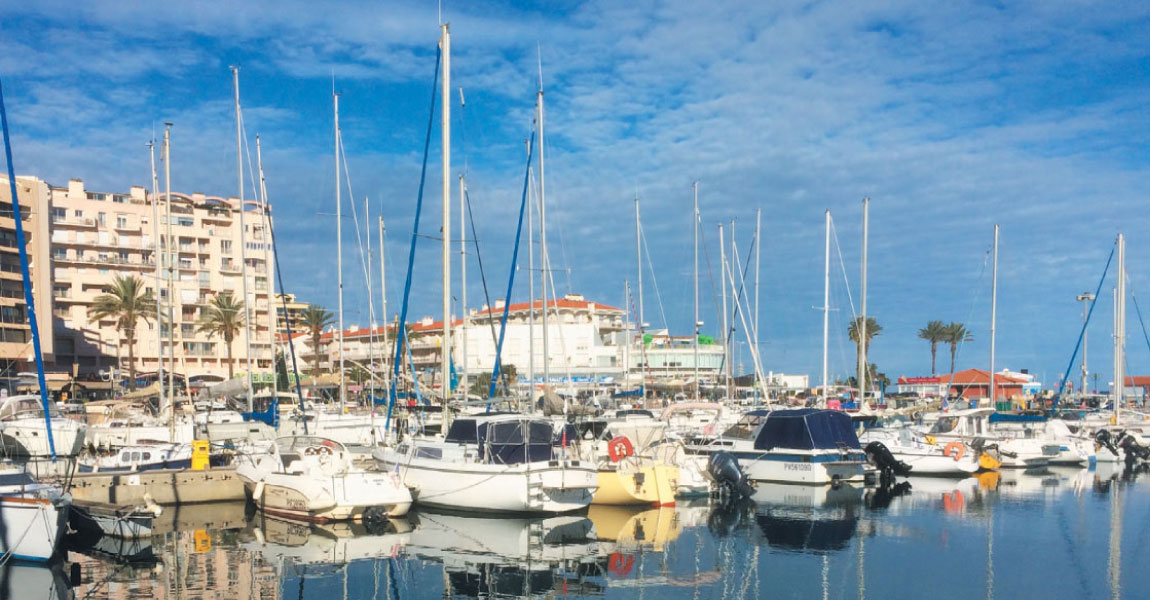 In 1963, it became part of the Racine Mission – a government measure to improve land use along the Mediterranean Coast with a view to attracting tourists. The port and the marina were completely redesigned to facilitate their transformation into the centre of the entertainment area in this seaside resort.

Blessed with a pleasant-looking sea front – with a footpath the length of the 6 kms of sandy beaches – Saint Cyprien is also a town dedicated to sport of various kinds. The Grand Stade des Capellans is a high level sports complex open to professionals and amateur sportsmen and women alike. Next door is a botanical garden – the Jardin des Plantes – a magnificent bower of greenery with many different species of plants.

► FOOTPATH It is pleasant walk or ride a bike through the Prade Park linking the seaside resort to the old village. 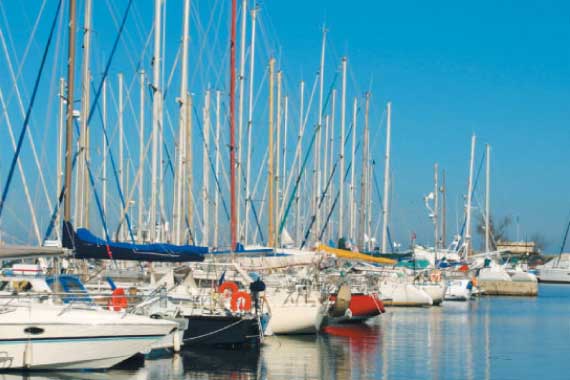 The port was the main access to the sea for the town of Illiberis (now Elne). During the 20th century the port was redesigned to place it at the centre of the seaside resort. Concentrating on eco-tourism, there are now approximately 2,200 births for boats making it the third largest yachting harbour in Europe and the second largest nationally. The marina is busy all year round but especially in the summer, with many shops and restaurants open for business. 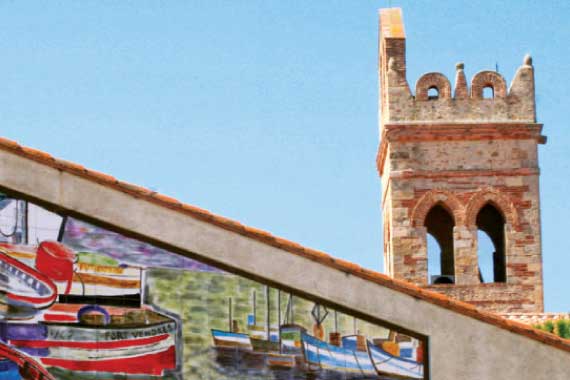 Until the beginning of the 20th century, it was mainly an agricultural village with an additional economic input from port activities. Saint Cyprien pursues an active policy towards cultural and the arts. The Desnoyer Collection showcases the work of the painter François Desnoyer, together with two other local artists from the Roussillon – all on display through temporary exhibitions.

►LOOK AT the 18th century church and the Romanesque chapel Saint Étienne-de-la-Vilarasa. 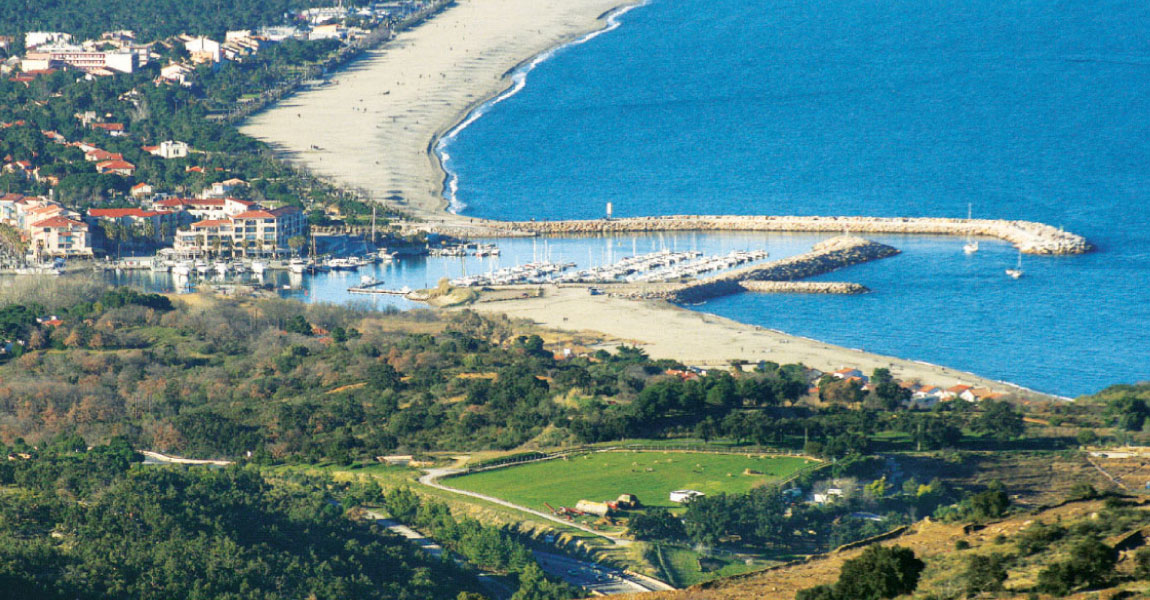 The village suffered from the impact of numerous conflicts between Spain and France, so fortifications were constructed in the 13th century – traces of which still exist. The 14th century Notre Dame dels Prats church was built in Southern Gothic style. Modified in the 17th century, it retained its famous bell-tower which rises to a height of 34 m. The Memorial of the Camp exhibits documents and reports relating to the Retirada (or Spanish Exodus), which occurred 80 years ago. Visits to the remembrance site are possible.

► WALK to discover the 12th century Romanesque church Saint Laurent-du-Mont, the Pujol Castle (probably built in the 11th century), ruins of the Taxo d’Avall castle and the Viscount’s chapel as well as the Saint Ferréol-de-la-Pave hermitage.

► DISCOVER the natural reserves of the Massane and Mas Larrieu. 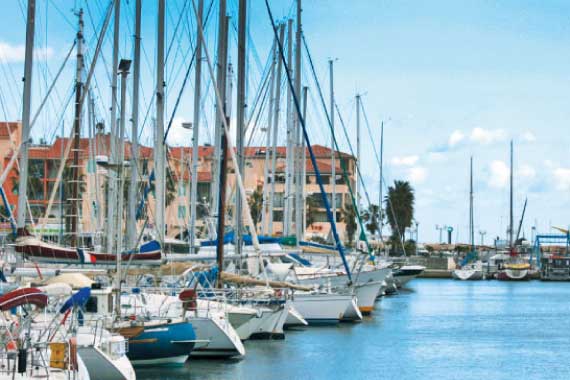 The port, with more than 850 berths, is blessed with the magnificent backdrop of the Albères mountains, and appreciated by yachtsmen.

Facing the sea is the very pleasant 12 hectare (29 acre) Pine Wood created in 1854, an all-year round haven of peace and relaxation.

The beach with its 7 km of sand and 2 km of creeks marks the beginning of the Vermillion Coast, to be explored just after the colourful seaside village of the Racou.

A very lively resort with its shops, casino and many events and entertainment, Argelès-sur-Mer has for many years been a popular choice for campers. The quality of its hospitality has long been recognised and it has been granted several awards.

► WALK along the coastal footpath that leads to Collioure.

There are several hiking trails which lead to the discovery of interesting heritage sites such as the dolmens (the oldest monuments in the region), the 13th century Massane Tower and the 19th century Château de Valmy gardens. 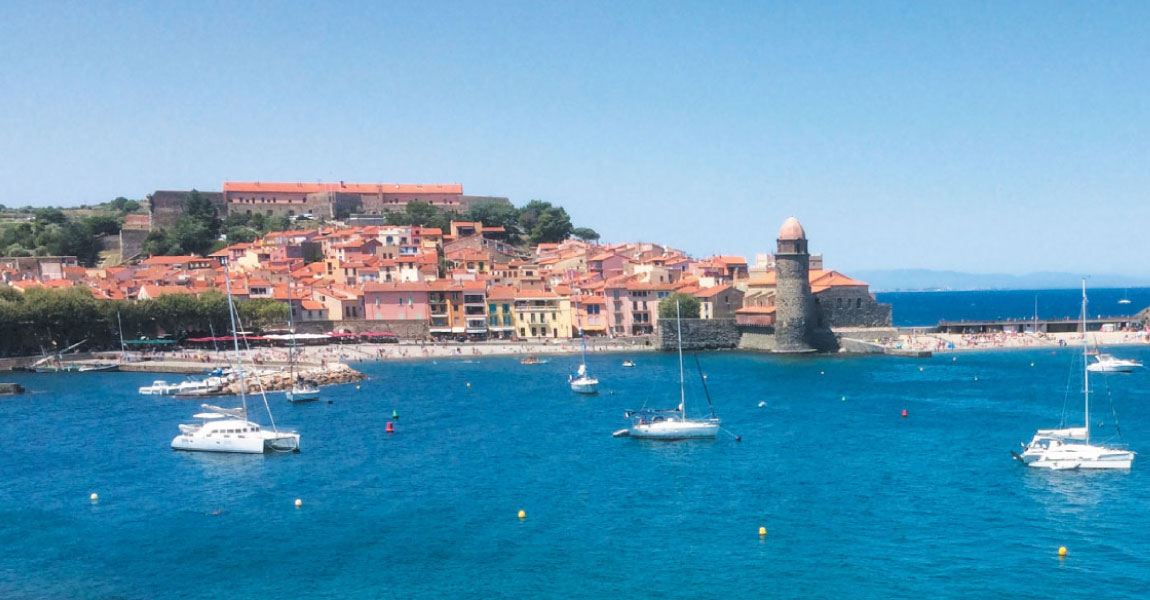 Considered as an important commercial port in ancient times, the town of Collioure needed some element of fortification. The construction of the castle in the 7th century, was followed by other defensive buildings such as the 16th century Saint Elme fort, the 18th century Round and Square forts as well as the 19th century Taillefer Battery. Full of exceptional colours, the town has attracted many inspired artists. This was particularly so in the 20th century with the birth of the Fauvist movement, when such artists as Matisse and Derain, came to live in the town during the summer of 1905. 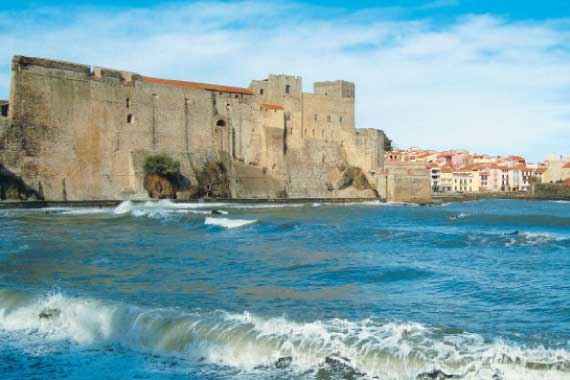 Referred to in writing from 673, the castle was a stronghold for the Counts of Roussillon who modified it in the 10th century. It was chosen as a summer residence by the Kings of Majorca, in the 17th century, with Vauban designing a glacis or steep protective surrounds. The castle gives the appearance of arising from the sea and is one of the symbols of Collioure. It was renovated in 1952 and now many cultural events take place within its walls.

Easily recognisable with its 19th century pink dome, the church has adorned the bay of Collioure since 1684. This building was designed in the Southern Gothic style and replaced the original church, which was destroyed by Vauban in 1672. Its individual charm stems from three of its sides being surrounded by water.

► LOOK AT the outside gallery built in 1725 and the 9 reredoses, including the master alter, gilded in in gold leaf.

The Museum of Modern Art is housed in the Maison Pams. It highlights the works of artists linked in someway to Collioure and Catalonia. It was on Jean Peské’s initiative that the museum was created in 1934 and since then, interesting temporary exhibitions of modern and contemporary art are featured.

This former fishermen’s quarter is easily recognisable by its colourful houses. Visitors enjoy exploring the art galleries that line these charming and picturesque streets. 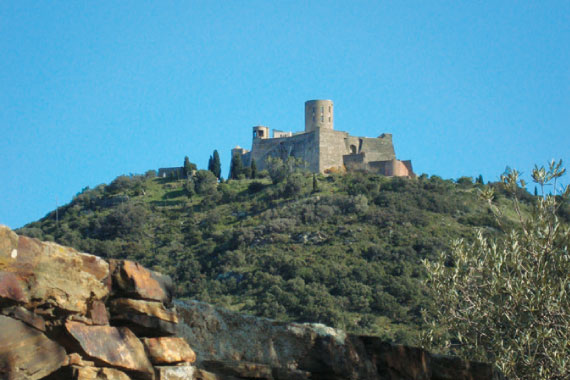 An impressive military fortification, built on the orders of Charles V, has kept watch over Collioure and Port-Vendres since the 16th century. Restoration work began in 2004 and took 4 years to complete, so by 2008 the fort reopened its doors to visitors.

Overlooking the sea, at an altitude of 150m, is a 17th century hermitage as well as a 12th century chapel in which seamen’s offerings can be seen.

Built as a watchtower on the Alberes Massif in 1285, the Madeloc Tower was part of a line of defence of the Roussillon when Spanish. At an altitude of over 650m, there is a magnificent panorama from this spot.

This charming locality, situated on the outskirts of Collioure, is a very popular rock-climbing site and the start of several pleasant rambles to discover the hinterland of Collioure. 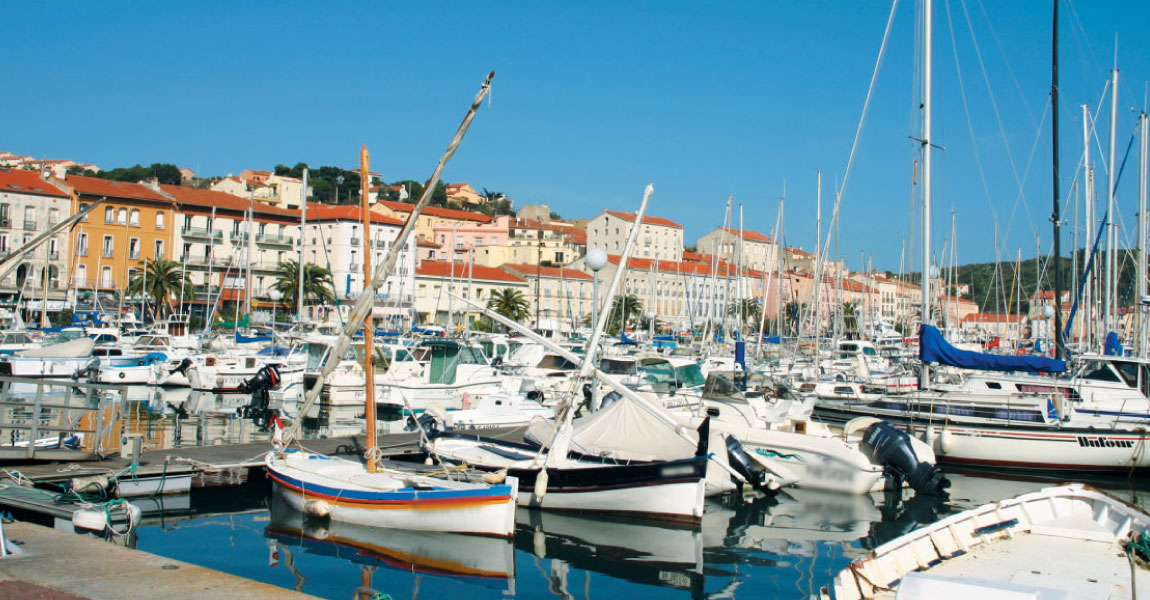 Probably founded in the 6th century B.C., Port Vendres was the first commercial port in the Roussillon. It was soon at the heart of exchanges with the Orient, even if the village itself did not really expand very much. In the 17th century, Vauban saw Port Vendres as a stronghold to be protected and so ordered the construction of the Fanal Redoute, Béar Redoute and the Presqu’Île Redoute (with the Clock Tower). Port Vendres is very popular with tourists for its charming port, its impressive landscapes and its 12kms of beaches and creeks.

► LOOK AT the Obelisk dedicated to Louis XVI (1760) the Notre Dame de la Bonne Nouvelle church (consecrated in 1888) and the War Memorial sculpted by Aristide Maillol.
► VISIT The Dome Art Centre and the Sidi Ferruch Museum at the Béar Redoute.
► PANORAMA from the Cap Béar. 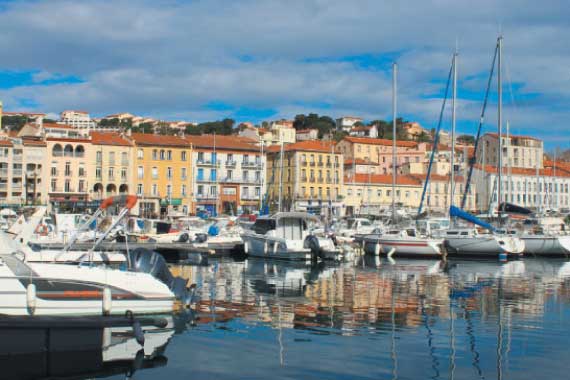 As the only naturally deep water port in the area, it is quite popular. First of all with yachtsmen, as it has over 260 berths available, and with tourists who come to admire the cruise ships or historical ships that moor here. Every morning, the fishing boats tie up at the quayside and the fishermen sell their daily catch. A typical sight which is well worth a visit ! Port Vendres is the second French port on the Mediterranean coast for fruit tonnage. It is also a hub for maritime commerce with the Saint Charles International Market in Perpignan.

Situated between the Cap Béar and Cap Oullestrell, the Bay of Paulilles and its 3 beaches offer some magnificent natural landscapes between the hillsides and the creeks.

►  VISIT the Museographic space built on the site of the former dynamite factory and the workshop where Catalan sailing boats are restored. 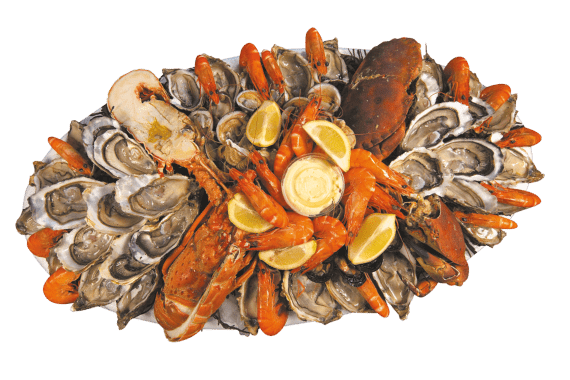 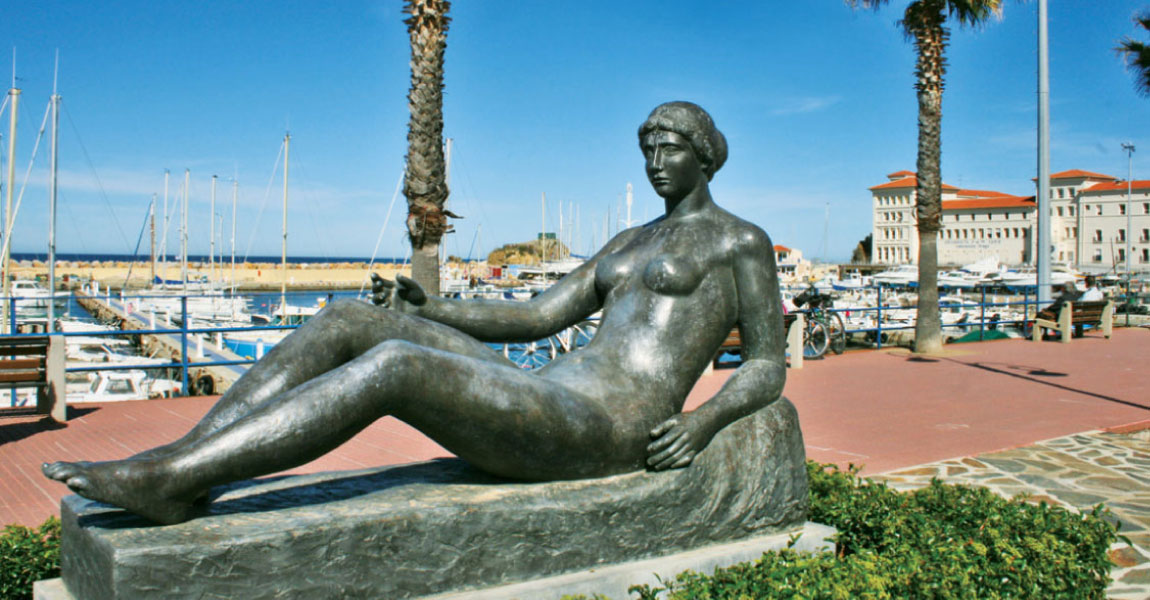 Vticulture and fishing – the two main mainstays of Banyuls-sur-Mer. With the arrival of the railway in 1880 and the success of their naturally sweet wine, Banuyls boomed. The town where Aristide Maillol was born in 1861 pays tribute to the man through several of his works installed: the War Memorial, La Jeune Fille Allongée (the young girl lying down) and Île de France sans bras (the armless Isle of France).

►  VISIT the not-to-be-missed Maillol Museum and the Biodiversarium (aquarium and botanic garden).
►  LOOK AT the 12th century Romanesque Rectoria church and the church of the Immaculate Conception (built in 1969).
►  PANORAMA from the Notre Dame de la Salette chapel.

F rom being a rather modest village mentioned in writing as early as the 9th century, Cerbère developed on the arrival of the railway 1878. The current railway station was designed by Gustave Eiffel and boosted the local economy. It was the main route for travellers wishing to go to and from Spain. Some stayed at the Belvédère du Rayon Vert, built in 1932, a former luxury hotel that resembles a liner. 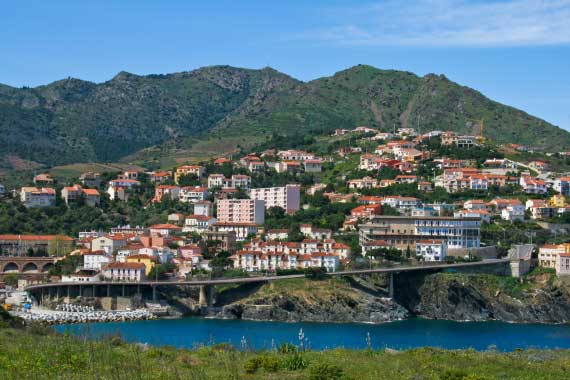